When pitcher Gus Weyhing began playing professionally in 1887, baseball was a different game than the one we know today. According to the Major League Baseball’s Official Historian John Thorn, the pitching distance was 4 feet, 3–1/2 inches shorter than that of today. Fielders didn’t wear gloves.

Playing under those circumstances for the first half of his career, Weyhing was dominant. In his rookie year he won 26 games.

Gus was just getting started.

Following a 28-win sophomore campaign in 1888, the man they called Rubber-Winged Gus then reeled off four straight 30-win seasons. From 1887 to 1893, Weyhing was consistently among the league leaders in wins, strikeouts, and shutouts. While throwing from the shorter distance, Weyhing was a star swing-and-miss hurler.

By the end of his age-26 season Weyhing had 200 career wins. His numbers through his first seven seasons compare favorably to many Hall of Fame hurlers.

Then everything changed. In March 1893, the National League voted to increase the pitching distance to the familiar modern mark of 60’6″. Though Weyhing managed 23 wins in his first year at the new distance, his path to greatness was forever derailed.

Before the rule change, Gus Weyhing was on his was to earning a plaque in Cooperstown. When the pitching distance was extended, he became a below-average hurler lucky to be in the big leagues.

Does Gus have a case for Cooperstown?

Despite his fall off in performance, Weyhing finished his career with 264 wins. Of the 40 pitchers with at least that many victories, 33 have a Hall of Fame plaque.

There are 79 Hall of Famers who played primarily in the majors as pitchers. The average number of victories by those pitchers is 246, eighteen less than Gus.

According to Baseball-Reference’s similarity scores, seven of the ten pitchers most similar to Weyhing are Cooperstown men. That, combined with Weyhing’s five consecutive 30-wins seasons might lead some to conclude he has a case for induction.

A closer look reveals that simply isn’t the case.

Cooperstown is full of elite winners; Weyhing’s .532 career winning percentage doesn’t rank in the top 500 all time. Among Hall of Fame pitchers, only Jack Morris’ ERA is higher than Weyhing’s 3.88 career mark.

His fielding also detracts from his Cooperstown case – only six pitchers in the history of the game have more errors than Gus.

Hall of Fame voters were right when they passed on Weyhing.

Weyhing had an enviable career in the game’s infancy

With a big league debut less than two decades after the birth of organized baseball, Weyhing played while the game was still getting established. Because of that, he lived quite the baseball odyssey. Gus threw for 11 teams in four different Major Leagues – the NL, AL, American Association, and the Players’ League.

Weyhing’s win total is more than the likes of Bob Gibson, Juan Marichal, Pedro Martinez, Carl Hubbell, and Mordecai Brown. His 35 wins in the minor leagues push his professional total to 303.

Pitcher Gus Weyhing will never gain induction to Cooperstown, but don’t shed a tear. Good ole Gus spent 18 years getting paid to play the game he loved. His is a career worthy of celebration. 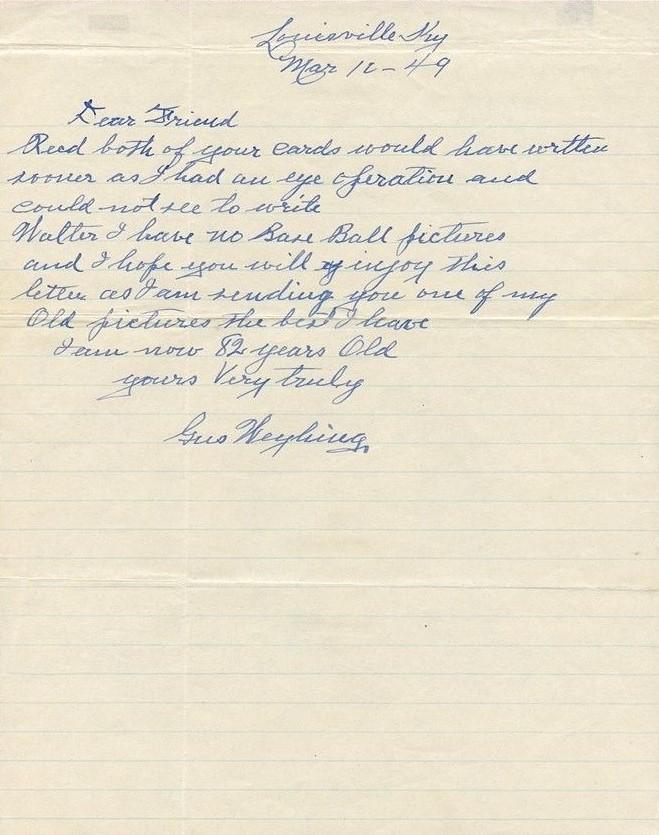 Though he debuted in 1887, Gus Weyhing received fan mail until his death in 1955

Gus Weyhing was born the year after the Union defeated the Confederacy in the US Civil War. Baseball was in its infancy. By the close of his teen years, Weyhing started playing professionally for the Charleston Seagulls in the Class B Southern Association.

Though he debuted in 1887, Gus Weyhing received fan mail until his death in 1955

Gus Weyhing was born the year after the Union defeated the Confederacy in the US Civil War. Baseball was in its infancy. By the close of his teen years, Weyhing started playing professionally for the Charleston Seagulls in the Class B Southern Association.

In 1887 Weyhing made his big league debut in the American Association with the Philadelphia Athletics. He enjoyed an 18-year playing career that included 303 wins in the minors and majors. His final big league season came in 1901 when the American League played its first game.

Weyhing enjoyed baseball notoriety for the rest of his life. Shown here is letter written by the pitcher and dated March 12, 1949. The 82-year old Weyhing tells a fan that he has no “Base Ball” pictures. 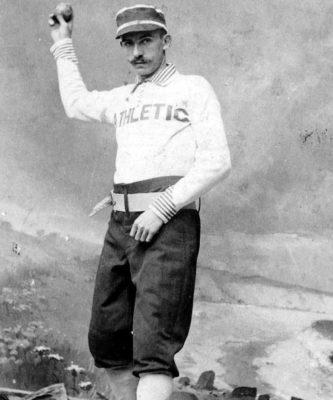