Tony Conigliaro was on the path to greatness before beaning

Tony Conigliaro made his big league debut in 1964 at the tender age of 19. The first pitch the Red Sox rookie saw in front of the Fenway faithful he hit over the Green Monster for a homer. During his time as a teenager the Massachusetts native slugged 24 homers – the most by any player before his 20th birthday.

Tony C had another fine year in ’66. He finished in the top ten among AL batters in triples, homers, total bases, RBI, and OPS. Finally old enough to drink, Conigliaro was on his way to becoming a superstar.

The first half of 1967 was more of the same. Selected as the starting right fielder in the All Star game, Conigliaro had the world on a string. Twelve days after the Mid Summer Classic he hit his 100th career homer – the youngest player in American League history to reach the plateau.

Then on August 18th, everything changed.

The beaning changes everything

In the bottom of the 4th inning in a scoreless tie Conigliaro stepped in against Angels pitcher Jack Hamilton. A journeyman righthander, Hamilton was playing for his fourth team in six seasons.

Hamilton lost his grip on a pitch that hit Conigliaro squarely in the left cheekbone.

“It was a high fastball,” Hamilton told The Associated Press in 1987. “He didn’t move at all. He didn’t even flinch, jerk his head or anything. It was hard to sit there and take a pitch like that.”

The 31,027 in attendance rose to their feet with concern.

After a long delay, Conigliaro was carried from the field on a stretcher.

The young star suffered a linear fracture of the left cheekbone, a dislocated jaw and severe damage to the retina in his left eye. At first the pitcher Hamilton had no idea of the severity of the injuries. The next day Hamilton was told Conigliaro may never play again.

“When I found out how serious it was, I tried to visit him at the hospital but they were only letting the family in,” Hamilton told the AP. “I never had a chance to see him or say anything to him after that.”

Conigliaro missed the remainder of the ’67 season and all of ’68 while recovering.

A successful yet short-lived comeback

The performance was on guts and willpower and in spite of excruciating headaches. The following year he was plagued by eye trouble. Soon the headaches became too much to bear. Tony C retired at age 25.

Conigliaro attempted a brief comeback with the Red Sox in 1975, playing in 21 games before leaving the game for good.

Later that year he became a sports anchor for a San Francisco television station. He held that job and various others for the next few years.

He was set to return to the city he adored and the fans who loved him back. On January 9 on the way to Boston’s Logan International Airport he suffered a heart attack.

Conigliaro was rushed to the hospital where doctors soon found that he suffered brain damage. He spent the next two months in the hospital before being discharged to his brother’s care. Conigliaro lived 8 more years before dying on February 24, 1990 at the age of 45.

Tony Conigliaro was once of baseball’s brightest young stars, on a path to the Hall of Fame. One pitch altered the trajectory of his career and turned his story into a baseball tragedy. 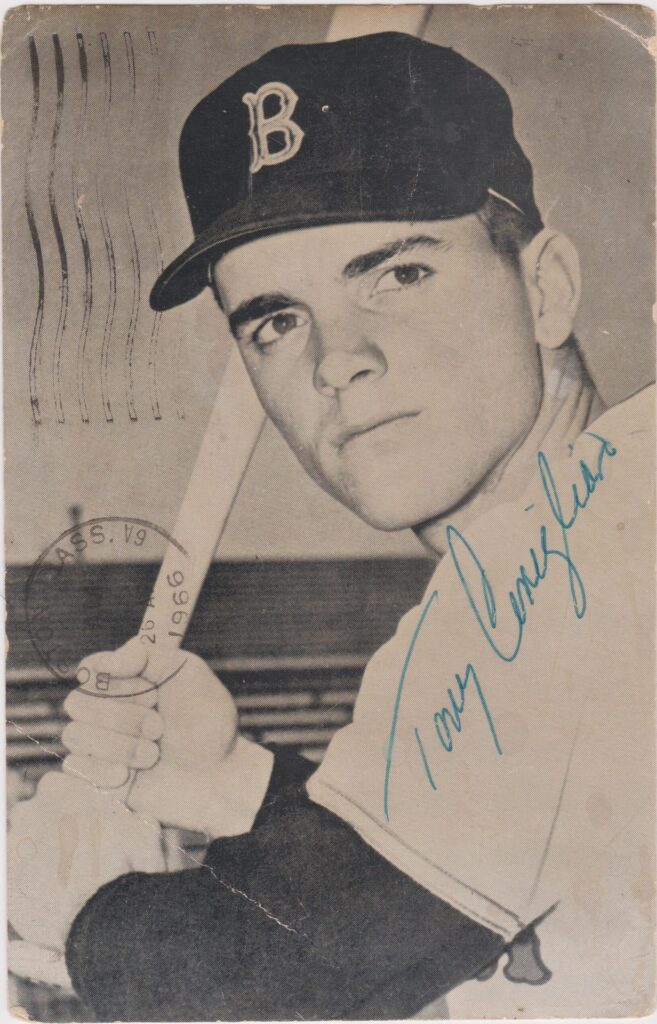 Tony Conigliaro was one of baseball's brightest stars

Tony Conigliaro was one of baseball's brightest stars

The beaning that caused headaches and eyesight impairment effectively ended his career and forever changed his life.

In the collection is this government postcard signed by Conigliaro. The postmark is from Boston and dated April 26, 1966 in the AM.

Later that day, Jim Lonborg took the hill against Whitey Ford in a battle of the rivals. Though the Red Sox dropped the contest 7-6 to the Yankees, Tony C did his part. The right fielder hit cleanup and went 3-for-5 with a single, double, and triple. He scored three times and had three runs batted in. 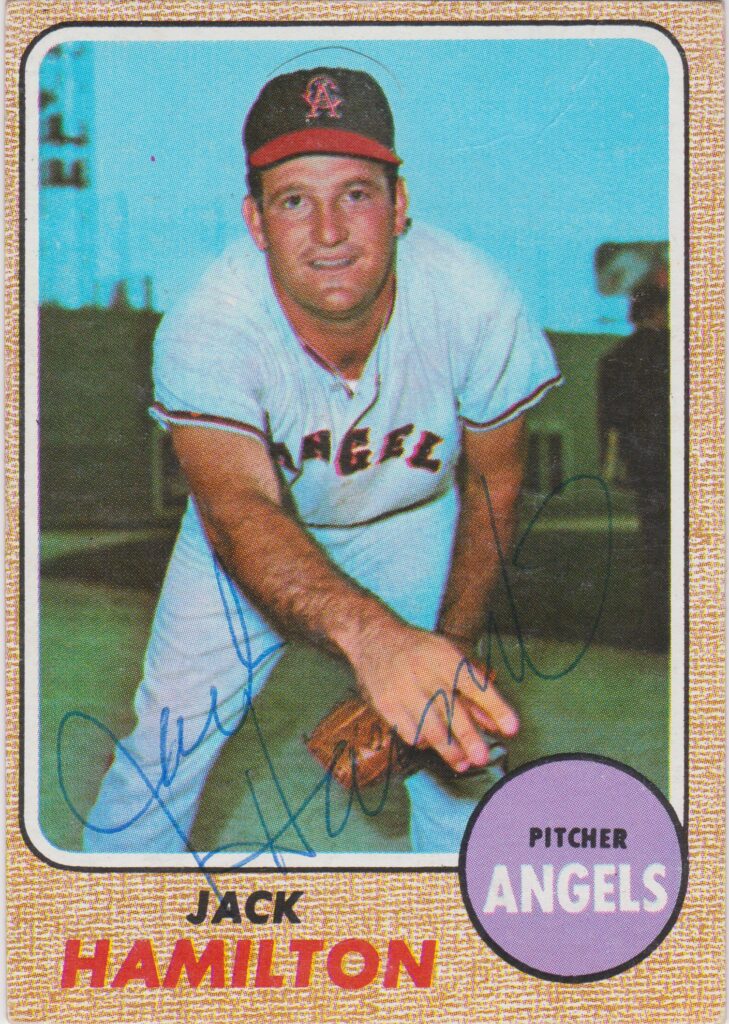 In the collection is this 1968 Topps card autographed by Hamilton. Notice the picture taken in 1967 at Fenway Park during the same series in which Hamilton hit Conigliaro. 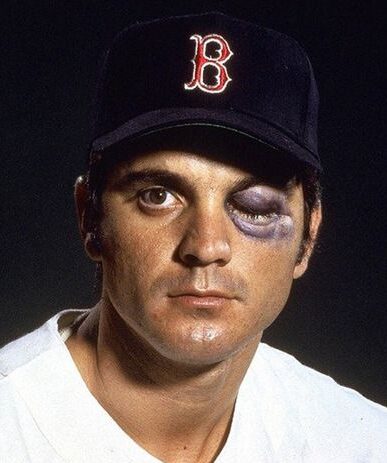