A white elephant? The Athletics turned an insult into a a team logo in 1902

The American League is formed and a feud is born

How did the white elephant become a symbol on the Oakland A’s uniforms?

We can thank a feud between Hall of Fame manager John McGraw and Ban Johnson the first American League president for that.

The story begins as the AL formed in 1901. At its inception the challenger to the NL wanted a team in Baltimore and needed McGraw to make that happen.

The future Hall of Fame skipper was a third baseman for Baltimore teams in the American Association and the National League dating back to 1891. By 1899 he also managed the Senior Circuit club. Before the turn of the century, the NL voted to contract and the Baltimore franchise ceased to exist. As the AL organized, it turned to Baltimore powerbroker McGraw to form a team in the city.

McGraw agreed and brought his fierce combative style with him as the team’s skipper. He believed the object of the game was to win and did everything to reach that end, even when it involved rule-bending and umpire baiting. The ham-fisted AL chief Johnson did not tolerate the kind of baseball philosophy McGraw embraced. Johnson wanted his league to have a more honorable way of operation.

The Orioles pilot and Johnson bumped heads early and often.

In June of 1901, McGraw recruited former teammate Hugh Jennings to play shortstop for Baltimore. Philadelphia Athletics owner Ben Shibe and manager Connie Mack also made an offer. When McGraw announced that Jennings would play for his team, Johnson nixed the deal citing the Athletics mutual interest. Jennings ended up signing with the NL’s Phillies.

McGraw was furious. He accused Johnson of siding with his old friend Connie Mack at McGraw’s expense. The episode amplified McGraw’s discontent with Johnson. It also built McGraw’s resentment of Mack and the A’s.

John McGraw leaves for the NL and delivers a parting shot

After a confrontation with umpire Tommy Connolly twenty games into the 1902 season, Johnson suspended McGraw indefinitely. It was the final straw for the Orioles manager.

McGraw bolted to the National League’s New York Giants, and left the AL forever. Often one to hold a grudge, McGraw wanted nothing more than to thwart Johnson and disparage the upstart AL. According to the Hall of Fame’s website, McGraw delivered a verbal parting shot on his way out of town.

“The American League is a loser and has been from the start,” McGraw stated.

He then singled out the Philadelphia franchise. According to McGraw, the Athletics were bound to fold because of their financial mismanagement. McGraw declared that owner Ben Shibe and manager Connie Mack had nothing more than a white elephant on their hands.

It was a curious statement by the future Hall of Fame manager. Mack’s men captured the American League pennant in ’02 while the Orioles finished in last place, 34 games behind. The Philadelphia club saw a league-leading 420,078 fans walk through the turnstiles. McGraw’s Baltimore club ranked at the bottom in attendance with a mere 174,606 paying customers.

Soon after McGraw likened the Athletics to a pale pachyderm, Shibe and Mack adopted the elephant as a team symbol to thumb their noses at McGraw. When Philadelphia held a parade to honor its ’02 baseball champions, the Athletics gave away 10,000 small tin elephants to fans. The team and the city turned McGraw’s derisive missive into a glorious symbol.

Mack owned and managed the Athletics into the 1950s. He made certain the white elephant remained as a prominent part of the Athletics’ lore.

Since Mack’s days in baseball ended, the Athletics franchise has relocated twice. Much has changed but the team’s embrace of McGraw’s insult remains. Despite the moves to Kansas City then Oakland, the Athletics continue to feature the white elephant on their jerseys more than a century after McGraw’s remarks.

With McGraw gone, Johnson relocated the AL Orioles. As an affront to McGraw, Johnson sent the former Baltimore franchise to New York. Known as the Highlanders, they shared Gotham with McGraw’s Giants. Ten years later, the team that McGraw first managed changed its name and became the New York Yankees.

McGraw too found an opportunity to further the feud. When his Giants won the pennant in 1904, McGraw took another jab at Johnson by refusing to play AL champion Boston in the World Series. The skipper reasoned the the Giants were already baseball’s world champs because of the inferiority of Johnson’s American League. After that, the Fall Classic went uninterrupted for the next 90 years.

Meanwhile the club that McGraw termed a white elephant thrived. Mack guided the Athletics to six pennants and three World Championships in the AL’s first 14 seasons.

Somehow that’s beautiful. All of it.

Steeped in the romance of history, baseball is a sport like no other. 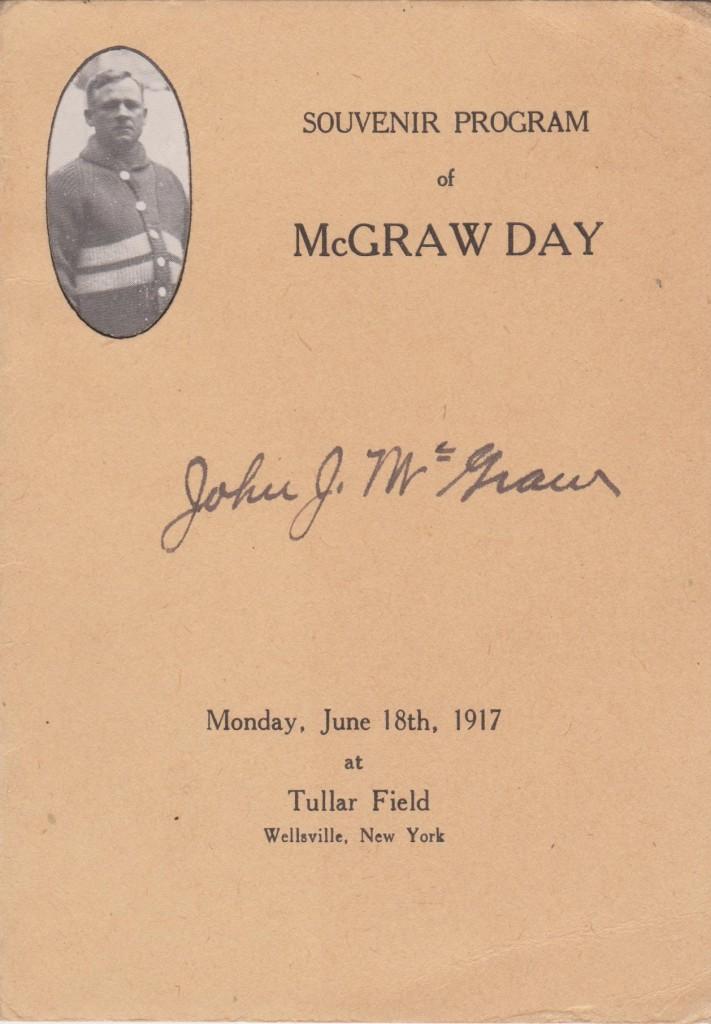 John McGraw holds the record for wins by a NL manager

John McGraw managed every season from 1899-1932. Thirty-one of those 33 seasons were in the National League. His body of work in the Senior Circuit includes 10 pennants and three World Series triumphs. McGraw also holds the caree

John McGraw holds the record for wins by a NL manager

John McGraw managed every season from 1899-1932. Thirty-one of those 33 seasons were in the National League. His body of work in the Senior Circuit includes 10 pennants and three World Series triumphs. McGraw also holds the career record for wins by a National League manager with 2,669.

Shown here is McGraw’s signature on a program from John McGraw Day on June 18, 1917. 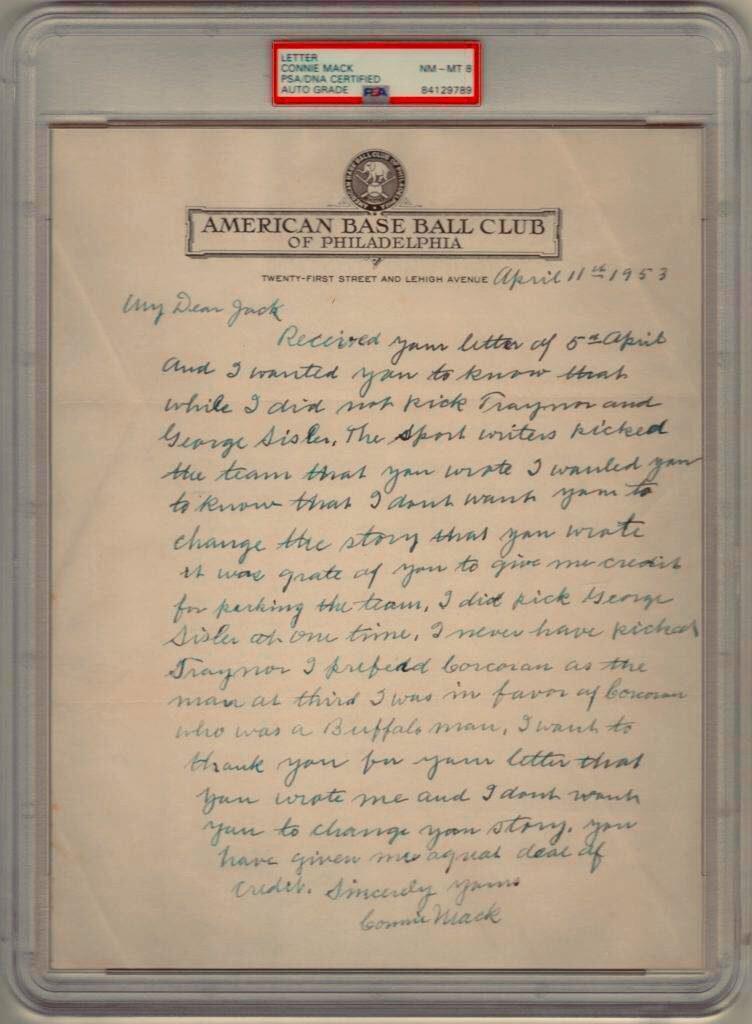 Connie Mack guided his teams to an MLB record 3,731 victories

Connie Mack‘s 3,731 wins as a big league manager should be mentioned in the same breath.

Connie Mack guided his teams to an MLB record 3,731 victories

Connie Mack‘s 3,731 wins as a big league manager should be mentioned in the same breath.

managed the Pittsburgh Pirates from 1894-1896 before taking the reigns of the Philadelphia Athletics in 1901. That year was the American League’s inaugural season. Mack led the Athletics for the next half-century before retiring in 1950.

In the collection is this handwritten letter dated April 11, 1953. Written to legendary sportswriter Jack Lang, its subject is Mack’s all-time team.

Ban Johnson was a powerbroker in the American League from the moment the Junior Circuit existed. The league president from the AL’s inception, Johnson held the post for more than a quarter century.

Ban Johnson was a powerbroker in the American League from the moment the Junior Circuit existed. The league president from the AL’s inception, Johnson held the post for more than a quarter century.

Shown here is Johnson’s signature on the 1925 contract for the Yankees Paul “Pee Wee” Wanninger. The document holds great historic significance. New York shortstop Everett Scott was in the midst of his record-setting string of 1,307 consecutive games played.

Scott was on the downside of his career by 1925. On May 5 Scott was hitting .208 and hurting the club. The next day New York manager Miller Huggins put Wanninger at shortstop and sat Scott to end the streak.

Just weeks later on June 1, Lou Gehrig pinch hit for Wanninger to start his own consecutive games played streak that would eclipse Scott.

The Yankees franchise started in Baltimore where its first manager was John McGraw. 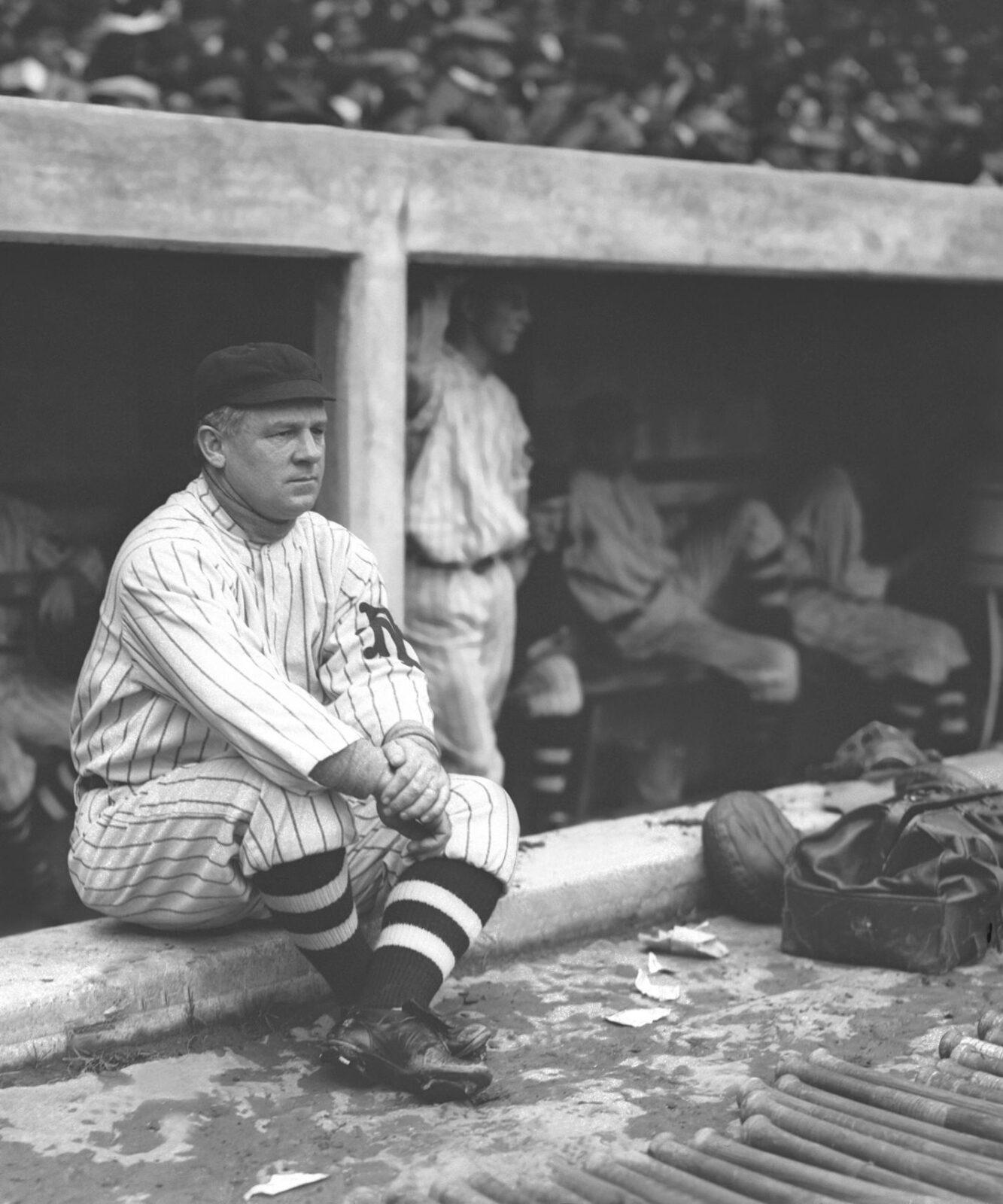 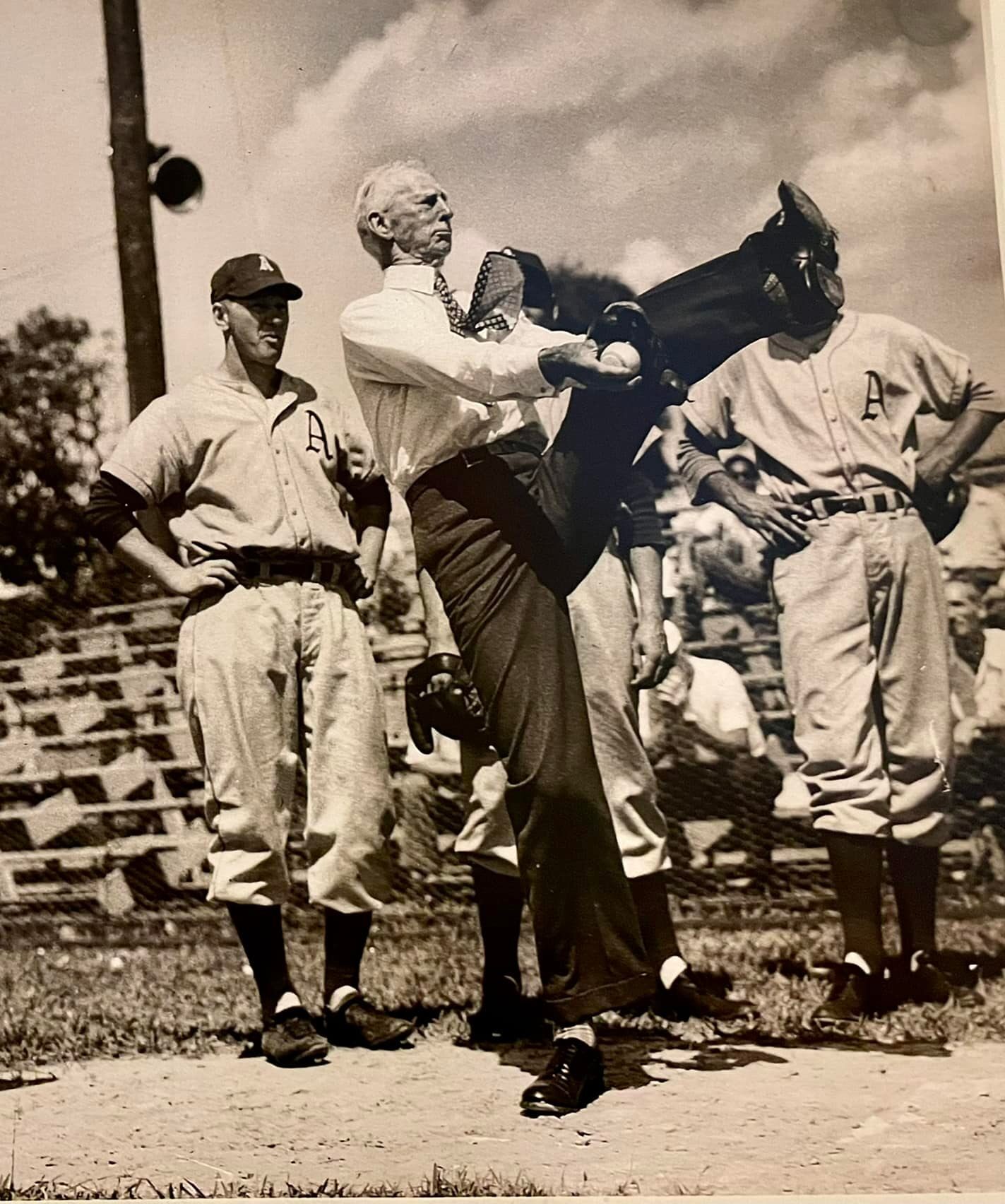 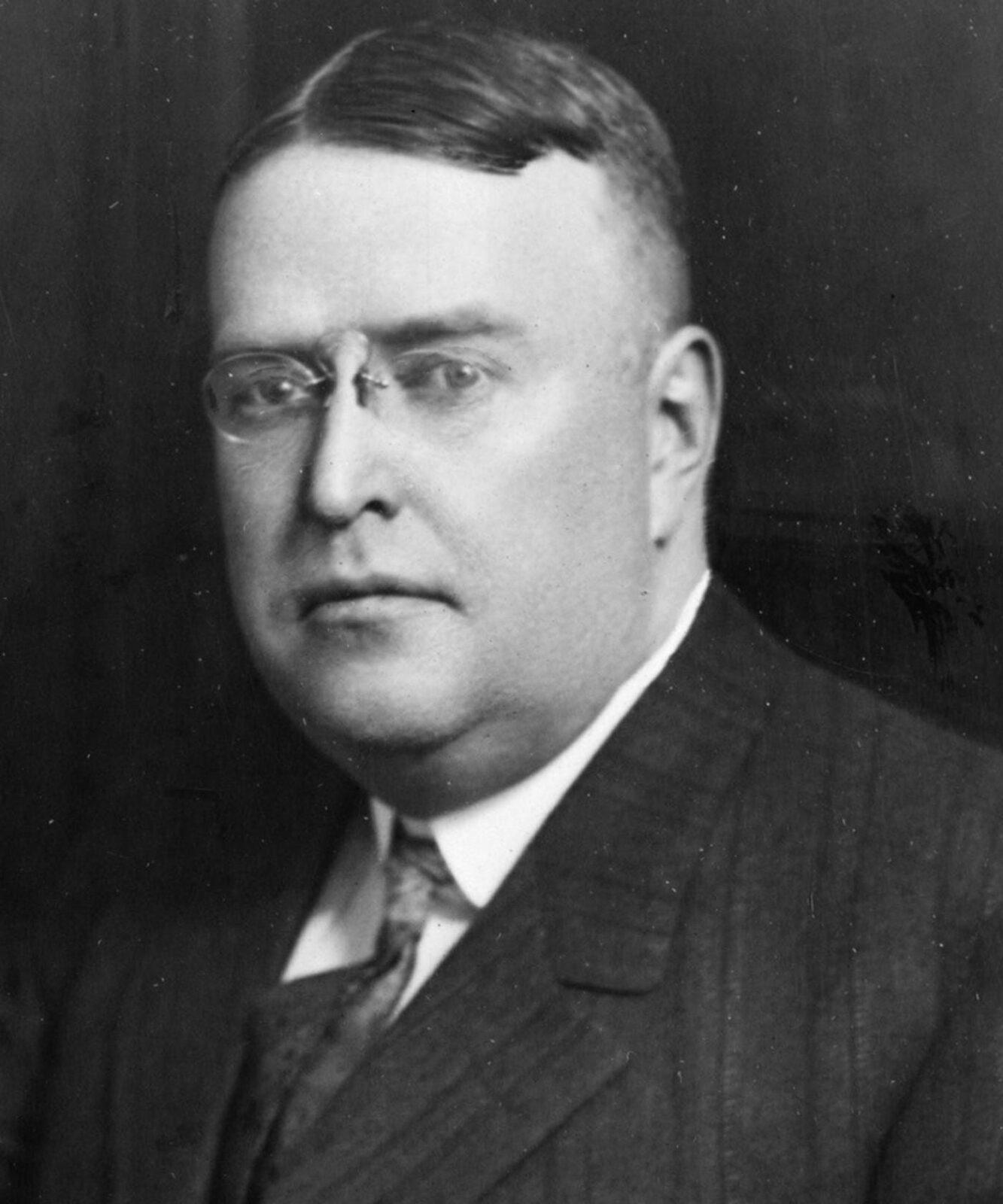 One response to “A white elephant? The Athletics turned an insult into a a team logo in 1902”