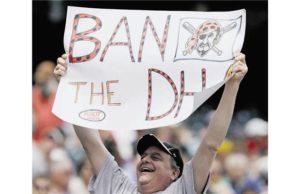 How times have changed. Today the National League remains one of few leagues above the high school level not to employ the designated hitter rule. The Senior Circuit continues to resist the rule that the AL has embraced for more than four decades. That wasn’t always the case. NL owners approve the “ten-man team rule” National League president John Heydler proposed the DH at the Winter Meetings on December 11, 1928. It was originally referred to as the “Ten-Man Team Rule”. Heydler’s motivations seem clear. He was looking to capture some of the excitement the homer-happy AL harnessed with the emergence of Babe Ruth. From 1920-1928 the Bambino was a one-man wrecking crew. The Babe had seven seasons with 40 or more homers, including four of 50 or more, and one with 60. During the same span Heydler’s league had only two 40-homer seasons.  Totals of 15, 21, 23, and 27 led NL in the 20’s. While the NL couldn’t match the AL in star power, Heydler felt keeping hurlers on the hill and out of the batters box might generate more offense. “Pitchers are absolutely useless as batters nowadays,” Heydler was quoted as saying in the Chicago papers. “The […]