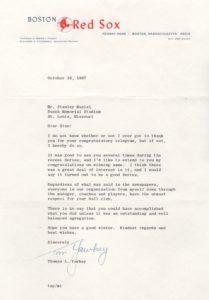 World Series championships are won on the field, not in the newspapers, but the press might have given the Cardinals extra motivation in their epic seven-game battle against the Red Sox in 1967. Boston had to grind it out just to get to the post season. The battle for supremacy in the American League came down to the last day of the regular season with Boston clinging to a half-game lead over Detroit. The Tigers had a double header at home against the Angels while the Red Sox played the Twins at Fenway Park. Boston turned to ace Jim Lonborg for the regular season finale. The 1967 Cy Young Award winner, Gentleman Jim responded with a gutty performance on three days rest going the distance and allowing only one earned run before the sellout crowd at Fenway. The October 1st contest was his 15th complete game of the season. The Tigers, needing a sweep of California won the first game 6-4 but couldn’t contain the Angels in the 8-5 loss in the second game of the twin bill. With the Detroit loss, Boston earned a berth to the World Series against the National Champion St. Louis Cardinals. On only two […] 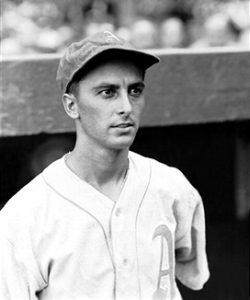 Al Niemiec played in only 78 big league games but made his presence felt with a landmark court case after the conclusion of World War II. Niemiec sued baseball and earned a win that sent ripples throughout the game. It is through the lens of the game that his impact is best understood. Niemiec played in 199 minor league contests before getting a September call up to the Red Sox for nine games in 1934. He spent the next year back in the bushes before being traded to the Athletics in a package that sent Hall of Fame slugger Jimmie Foxx to Boston. Though Niemiec spent the entire season with Philadelphia, it would be his last as a big leaguer. By 1938 Niemiec moved to the Pacific Coast League for a five-year run that included three consecutive championships with the Seattle Rainers from 1939-1941. The ’41 season was a good one for Niemiec who hit .297 while leading second basemen in fielding for the third straight season. For his efforts, he was named the PCL’s outstanding player at his position. At the end of the following season Niemiec was called to serve in the navy where he remained until his honorable discharge in January of 1946. When retired Lieutenant […]