Eric Smith PA Announcer: The man with the voice from above 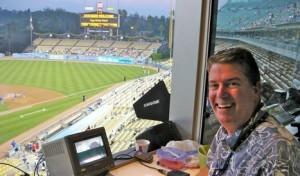 When Eric Smith talks, people listen. As public address announcer for theDodgers, Smith’s commanding voice is a sound as familiar to fans attending Dodger games as the organ music of Take Me Out to the Ball Game. For the last ten years, Smith has been the voice from above, announcing the players to the fans who come through the turnstiles each season – all three million of them. “That’s an intimidating number when you think about it,” Smith says. “There’s certainly responsibility that comes with that.” Perhaps Smith’s biggest responsibility is announcing players into the game. When a player is on deck as a pinch hitter, he becomes a part of the game when Smith announces him. Before that happens, the manager tells the umpire he’s making the change. The umpire then gestures to the press box in Eric’s direction to alert him to announce the player. In a preseason game in Smith’s first year, he learned this procedure in dramatic fashion. Jim Tracy, the Dodger manager at the time, instructed a player swing a bat in the on-deck circle. Tracy had no intention of actually having the player pinch-hit. “He was hoping the other manager would see the on-deck hitter and change […]