Buddy Lewis began his major league career with the Washington Senators in 1935, just one month after his 19th birthday. A regular for Bucky Harris’ club in ’36, Lewis had 175 hits and 100 runs scored. In his age-20 campaign of ’37, Lewis’ 210 hits were more than all but three American Leaguers. For an encore, Lewis started at third base in the 1938 All Star game. Seven of the nine AL starters ended up in Cooperstown.

When the infielder recorded his 1,000th career hit on June 4, 1941 he was just 24 years old. Only four players in major league history reached the 1,000-hit plateau at  a younger age. All are in the Hall of Fame – Ty Cobb, Mel Ott, Al Kaline, and Freddie Lindstrom.

By the end of the ’41 season Lewis had 1,112 hits. In his first six full seasons he hit .306, averaging 185 hits, 30 doubles per year. Lewis walked nearly twice as much as he struck out. He was one of baseball’s rising young stars.

Then the war came.

Enlisting into the army to serve his country

After he received his draft notice, Lewis instead enlisted into the army where he became a pilot. He named his plane “The Old Fox”, the nickname given to Washington Senators owner Clark Griffith when he was a player.

Flying his C-47 transport plane, Lewis flew over the Hump, the treacherous stretch over the Himalayas. He nimbly managed the clunky plane.

According to Lewis’ SABR biography, fellow big leaguer Luke Sewell who flew with Lewis said, “He set that big transport down on strips that didn’t look big enough for a mosquito to land on. And he did it while he was talking baseball to me.”

Lewis was part of an elite unit that towed gliders carrying air commandos over Burma and India. The troops he ferried landed behind enemy lines in the war effort against Japan. When the commandos completed their mission, Lewis flew low over the grounded gliders, picking them up with a skyhook so he could bring the troops home.

Lewis is quoted in a SARB article speaking about the dangers of his charge. “Let me tell you, you didn’t want to go down over those jungles. They gave me two pieces of advice. They said the day I crashed in Burma, if I survived, to come out of the plane with a baseball in my hand. I’m serious. They told me it might just save my life because the Japanese love baseball and they will take care of you. The other advice was that I was given a cake of cocaine to carry in my pocket. If I crashed in the jungle, and the natives found me, to give it to them and they would get me out of the jungle and to safety.”

Lewis ascended to the rank of captain, flying 369 missions and earning the Distinguished Flying Cross and the Air Medal with oak leaf cluster.

Returning to the game after 3 1/2 years at war

By the time he returned to the game, Lewis missed 3 1/2 years of baseball. Just 25 years old when he left, the infielder was 14 days shy of of 29th birthday when he played his first game back. The toll of his time in the war was apparent.

“My good friend, Buddy Lewis left for war and missed four years of baseball,” recalled teammate George Case. “He left a dark-haired man and came back to us at the end of 1945 with a full head of white hair and some hair-raising stories.”

Things were never the same for Lewis back on the diamond.

“When I came back from the war, my philosophy of life was completely different,” Lewis explained years later. “I had changed so much that baseball didn’t mean as much to me as it did before the war.”

In the six seasons before he enlisted, Lewis was an all star who averaged 50 extra-base hits and nearly 200 safeties per season. From the time he was 19 through his 25th birthday, he was a .300 hitter. Lewis was on the path to 3,000 hits and all that comes with it.

Adjusting to life as a baseball player

“I never realized how much the game was a part of me until I stayed out of it last season,” Lewis said. “When I saw those lineups and scores in the papers, I felt lonesome for baseball.”

For the first 7 years of his career Buddy Lewis played his way onto the path to Cooperstown. That all changed when he enlisted into the armed forces. His service to our country in World War II was invaluable in the effort to keep America free.

Though he lost his chance at baseball immortality, Lewis answered a higher calling. 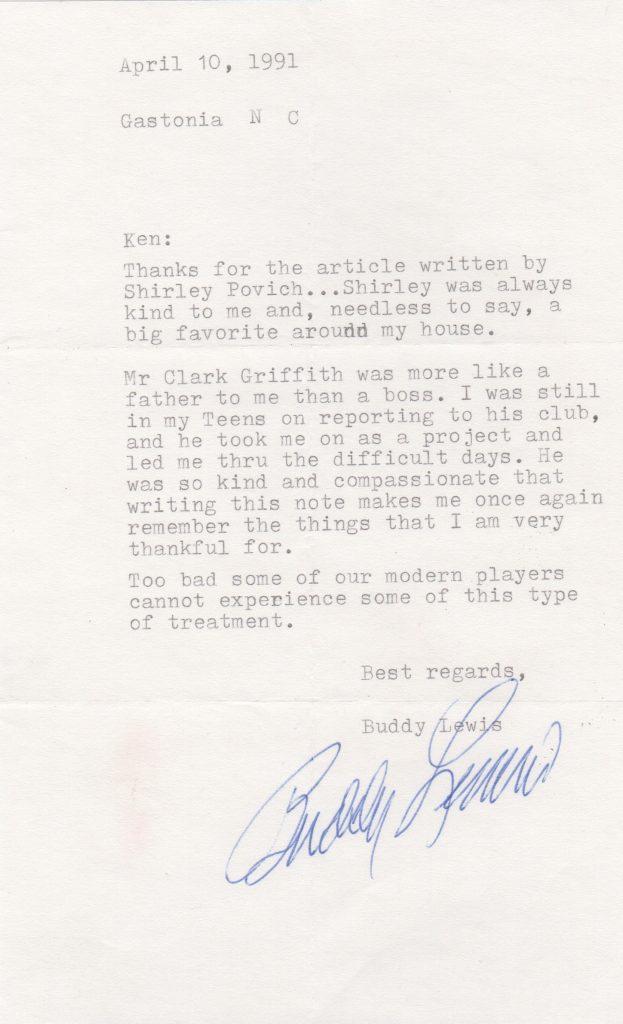 Buddy Lewis thought highly of Hall of Fame Senators owner Clark Griffith. Their bond was so strong that Lewis named the C-47 he flew in World War II, “T

Buddy Lewis thought highly of Hall of Fame Senators owner Clark Griffith. Their bond was so strong that Lewis named the C-47 he flew in World War II, “The Old Fox” in honor of the nickname of the Washington owner.

A 237-game winner as a pitcher in the early days of the game, Griffith is the only man to serve 20 years as player, manager, and owner.

Lewis was a star for Griffith’s club. After debuting in his teens and finding quick success, Lewis is one of the youngest in history to amass 1,000 hits. By 1941 he was on his way to 3,000 hits.

Then he entered the war. A pilot, Lewis named his plane “The Old Fox” after the Senators owner. He survived 369 missions in the war.

In the collection is a letter from Lewis who writes of Griffith, “Mr. Griffith was more like a father to me than a boss. I was still in my teens on reporting to his club, and he took me on as a project and led me through the difficult days. He was so kind and compassionate that writing this note makes me once again remember the things that I am very grateful for.” 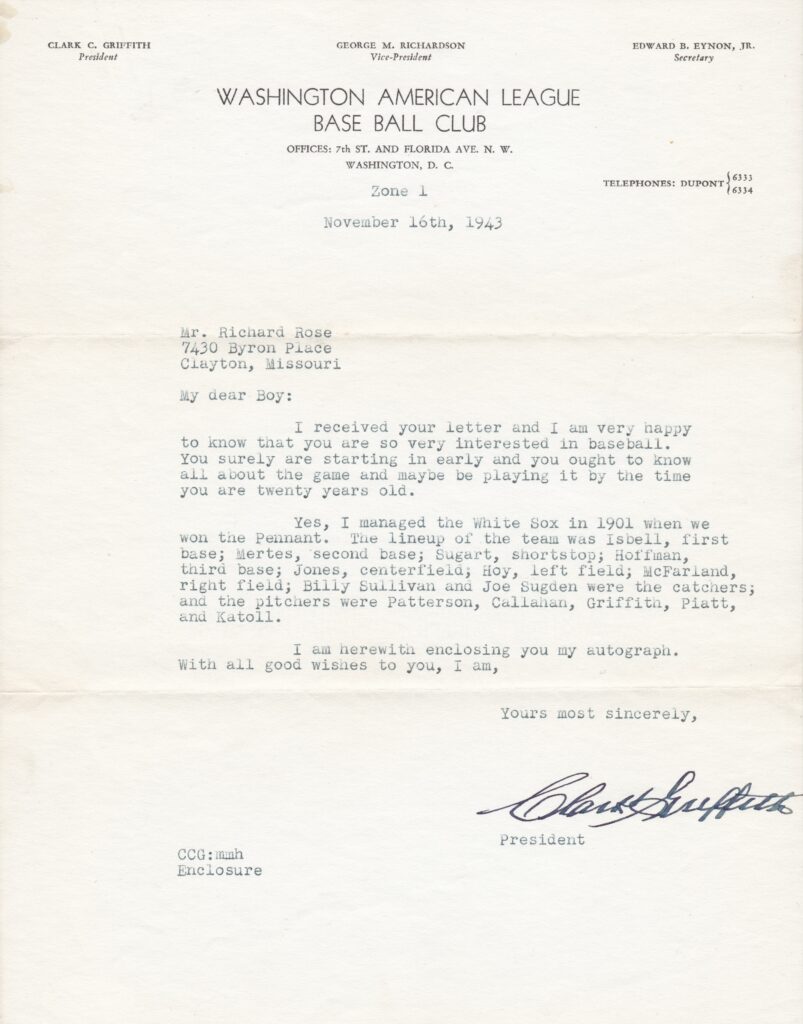 Hall of Famer Clark Griffith spent a lifetime in the game as a player, manager, and owner

Buddy Lewis was flying missions in a C-47 for the US Army when this letter was written in November of 1943. The plane he piloted

Hall of Famer Clark Griffith spent a lifetime in the game as a player, manager, and owner

Buddy Lewis was flying missions in a C-47 for the US Army when this letter was written in November of 1943. The plane he piloted

was named, “The Old Fox” after the letter’s author Senators owner Clark Griffith.

Clark Griffith’s Hall of Fame page lists his primary position as an executive. He also won 237 games as a pitcher. The Old Fox also managed four teams to 1,491 games over 20 seasons.

Griffith was both the ace and the manager of the American League’s first pennant winner. The first year of the Junior Circuit’s play he led the White Sox with 24 wins, leading the league in both winning percentage and shutouts.

In this letter, Griffith recounts that Chicago club.

“Yes, I managed the White Sox in 1901 when we won the pennant,” Griffith writes. “The lineup of the team was Isbell, first base; Mertes, second base; Sugart shortstop; Hoffman (sic), third base; Jones, centerfield; Hoy, left field; McFarland, right field, Billy Sullivan and Joe Sugden were the catchers; and the pitchers were Patterson, Callahan, Griffith, Platt, and Katoll.” 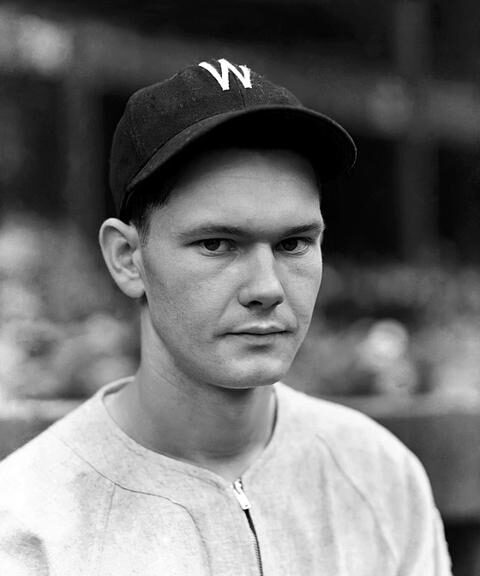 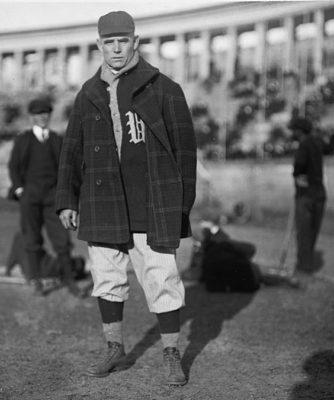